Working on a third tachanka, this one is based on a plan created by Mike O. Here are my own attempts at following his plan. Perhaps I'll ask if he minds if I share the plans here.


I didn't get the measurements from Mike O for the plan, so I more-or-less guessed on sizing. The tachanka came out a little large for my liking. I'll likely make a 4th version off of a similar plan, slightly scaled down.
Here's how it ended up once put together with figures and horses, then spray primed brown. The figures are from various sources (HAT Russian Heavy Weapons, Orion Red First Cavalry's Budenny himself as the gunner, with a converted hat of clay and glue, as well as some Strelets Tereck Cossack Cavalry).

Posted by TrenchesFullofPoets at 8:12 PM No comments: 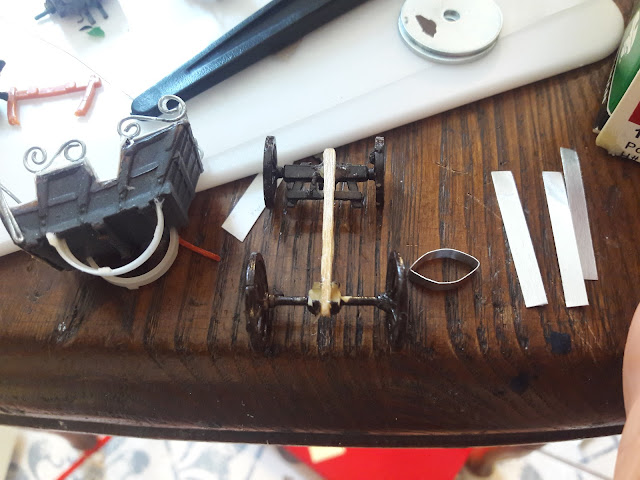 Following a helpful suggestion, I used some strip metal to cut thin strips out, folded them over to make the springs. 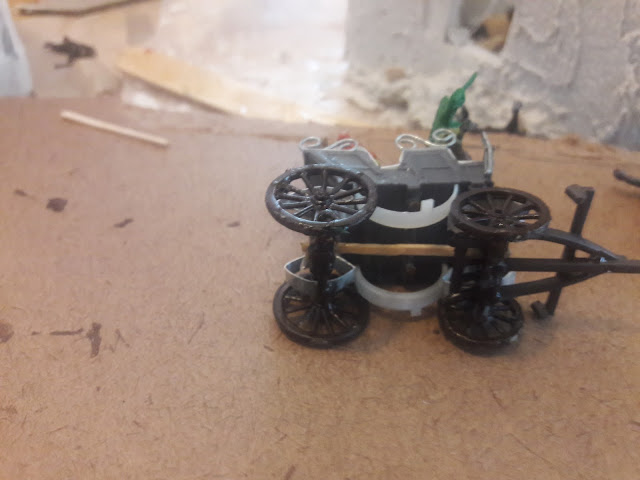 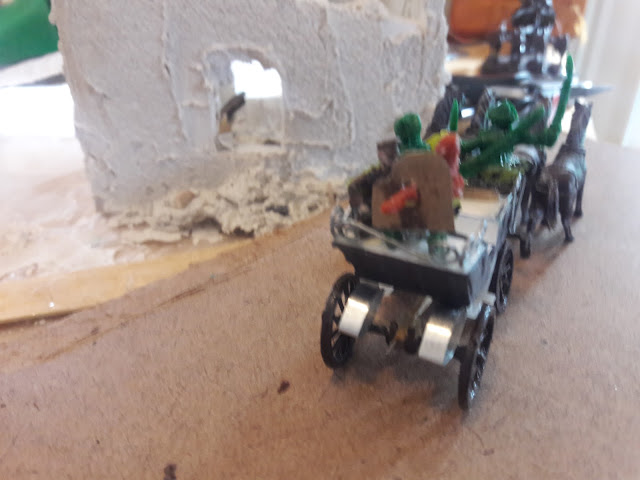 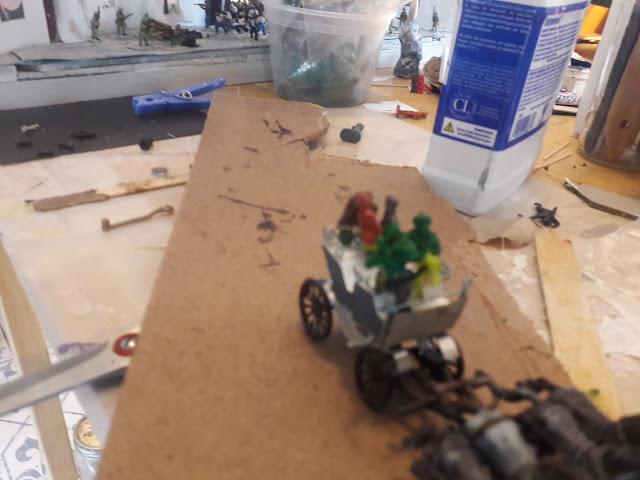 Here are my two tachankas, spray painted brown, ready to be painted. You can see, I began adding gray on the hats of some on the first (these will be painted over white, the gray beneath it will add some depth). 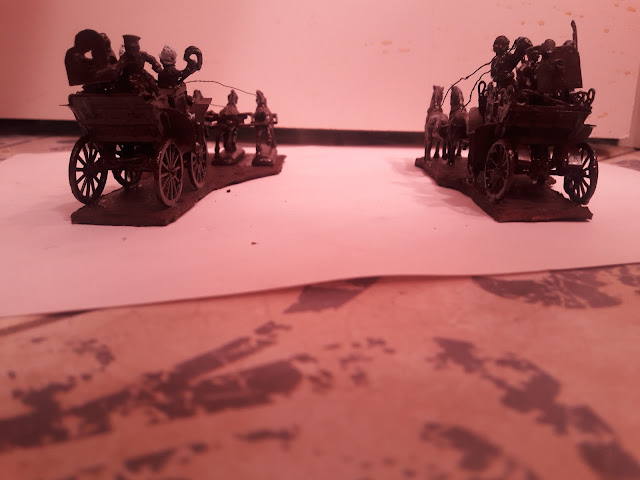 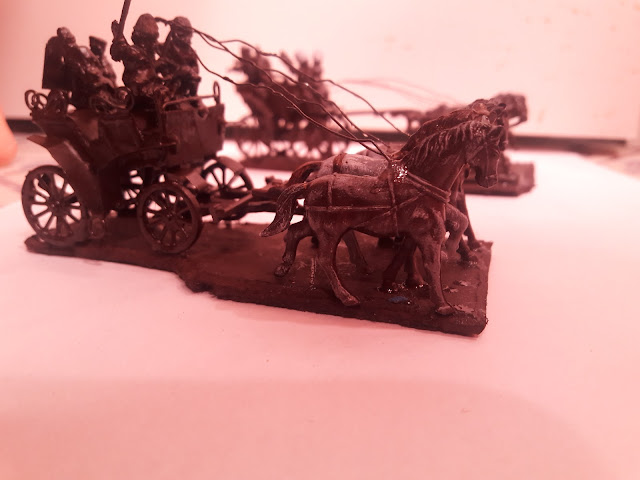 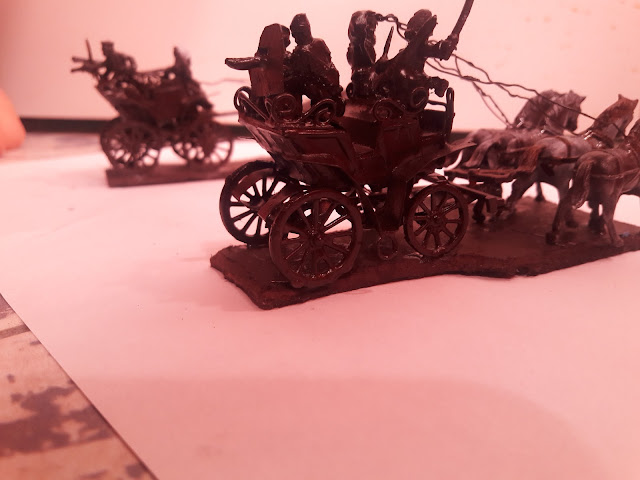 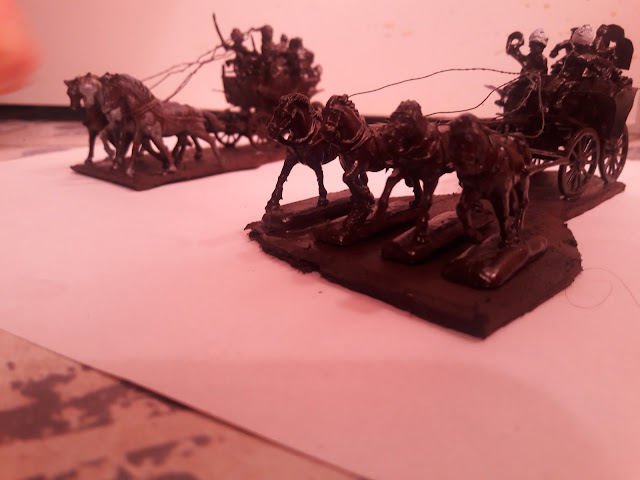 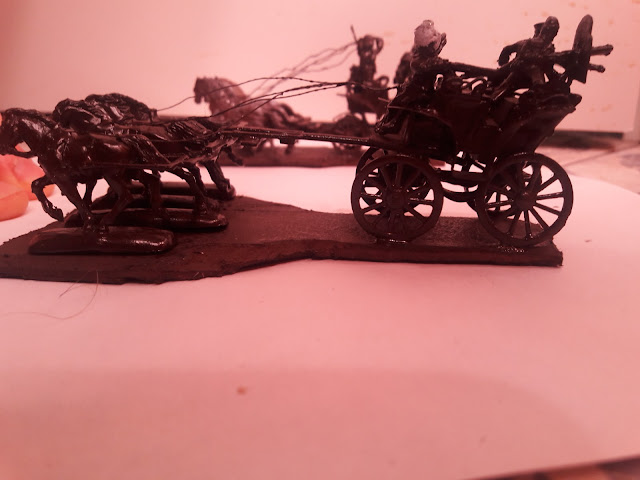 Thanks for reading. I'll update again once i've painted them. Before that, with some free time and a little luck, I'll share my (close-to-finished) Telefonica diorama from the Spanish Revolution of 1936.

Posted by TrenchesFullofPoets at 8:35 AM No comments:

Hi everyone. Switching gears for a bit, I've been working on some models to represent the Makhnovists of the Russian Civil War and Ukrainian Revolution. Nestor Makhno was a anarchist peasant from southern Ukraine who led a movement of peasants and workers for freedom and equality. Unfortunately for them, this meant they were forced to fight against a combined Austrian-German occupation force, their own Ukrainian ruling class, and then both the White and Red armies of the Russian Civil War. The above forces packed heavy weapons and equipment, including airplanes, tanks, and armored trains. What is a peasant to do?

Luckily, Makhno and his comrades had peasants' ingenuity. They are credited with the invention of this deadly little cart - the Tachanka: a simple peasants cart, hooked up to four horses, but with a machine gun placed in the back. The Makhnovists used them with violent effect against enemy cavalry and infantry. They would speed into battle, often setting up on the enemy's flanks. Tachankas could also be quickly and quietly pulled into position in the dark of night or under some other cover, to surprise the enemy with a hail of unexpected machine gun fire

The tachankas also made the Makhnovists very difficult to pursue, which was essential for a smaller, lighter, and poorly-equipped band of peasants going toe to toe with the major powers of their region. Many of the bigger armies were dependent on the train lines, and incapable of chasing the anarchists across the Steppe. This task became harder when tachankas fired back as the Maknovists retreated. The tachankas were so effective that many of those opposing forces adopted their use, and even carried them into World War Two.

That success, in fact, is at the heart of my dilemma. I recently began working on models for the Makhnovists, but there are not many model tachankas available in the scale i'm using (1/72). The ones that do exist are based on later models, and just don't look like peasant horse carts. So I decided to scratch-build my own. It wont be perfect, but I dont have to spend any extra money as i have all the pieces at my disposal. If it comes out well, I'll make a few more. If not, then I'll learn in the process.

I began by cutting a model covered wagon in half. Then i carved out stepped sections for the sides of the benches. I used index cards and wire to make the seats and rails. 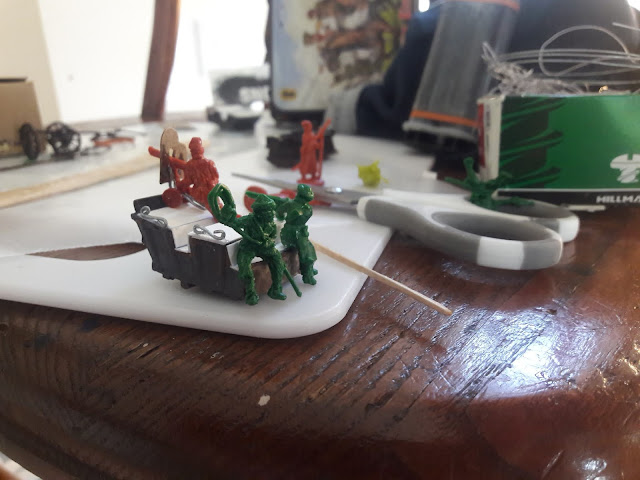 I took the wheels off of the wagon and glued them to some scrap plastic sprues. The riders are mostly Strelets' Terek cossacks cavalry with their epelets and traditional ammo pouches cut off and their hats raised up with a little pinch of clay. I also cut off their legs and reglued them so they're sitting sideways. I had to swap legs to make that work, so one has 2 right legs, another 2 left legs. The gunner is a modified Streltsi of 17th century Russia. I got 3 of them that came as extras in a box of Strelets Rif Rebels, i thought id never have a use for them. A little knife work and they look ok for my purpose. I built the rest of the gun from cardboard, wire, and round sprues cut for wheels. If this comes out well, ill buy nicer guns for future versions. 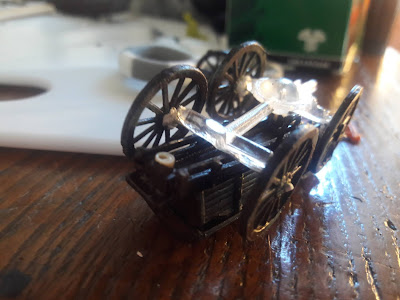 The Tachankas had good sets of axel springs on them, so i cut some more plastic bits and wire to build a basic spring structure and raise the cart up above the wheels. I modified some unused horse rigging, probably from some HAT artillery and limber set. 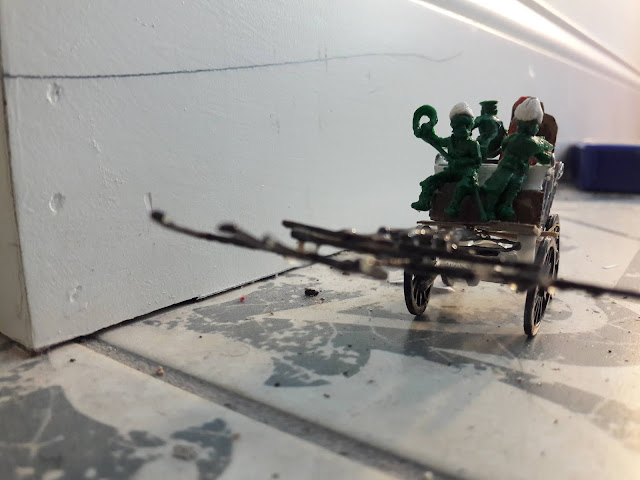 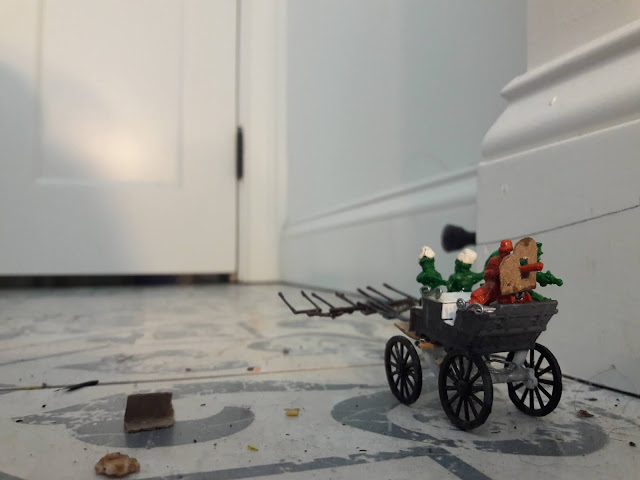 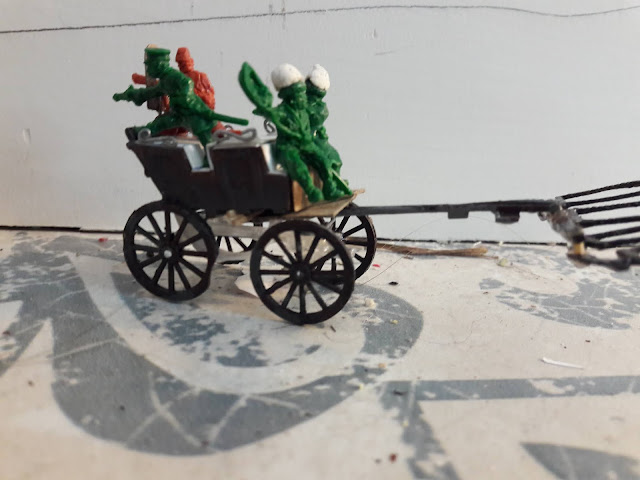 The horses are just the Terek cavalry horses that belonged to the figures i used. I cut off their blanket rolls (though not yet in the photo below) and smoothed out the ridges of their saddles the best i could. 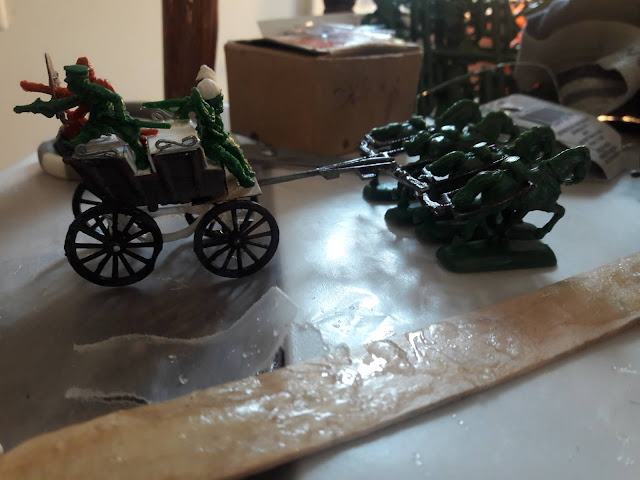 Then i cut out the mud guards, or whatever they're called, from index card, and carefully glued them into place, using toothpicks and wire bits for supports. 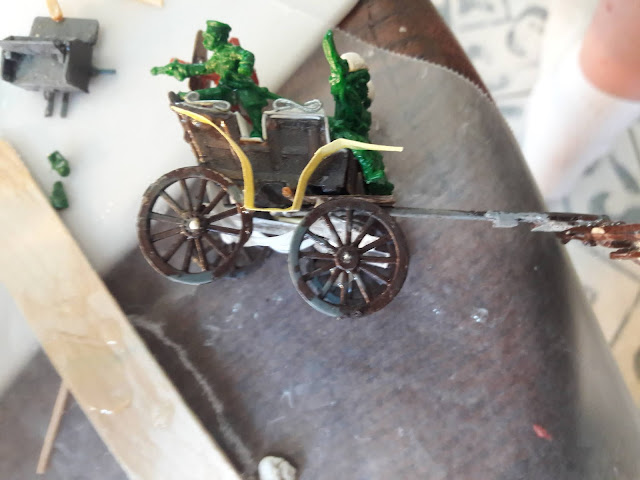 Next, i will spray paint the underside of this model dark brown (which would be harder to do after its based), attach the horses, and add thin wire for the reins. The whole thing will then be sparypainted brown and placed on a thin, t-shaped base (of what, im not sure yet). Then, Ill be ready for painting it up. Ill share more from this project as it develops, thanks for reading this post!
Posted by TrenchesFullofPoets at 2:54 PM No comments:

Welcome to my blog - Here's some Vehicles of the Durruti Column!

Hi all, welcome to my new blog. Here you will find photos of dioramas and miniatures of revolutionary movements. For the last two years, I have focused on the Spanish Revolution, an effort by Spanish workers--and in particular those of the anarchist union CNT and political organization FAI--to remake the world around them within the Republican Zone, in the midst of the Spanish Civil War (1936-39).

For my first post, I'd like to share the vehicles of the Durruti Column I have made. A few of these are bought plastic models assembled (though modified), some are paper models printed out, and others still scratch-built from spare parts, clay, index cards and more. I hand-painted each of these. I hope you enjoy looking at them, and perhaps learn something about an interesting time in history, when workers, armed with little more than ingenuity and a vision for a new world of freedom and equality, faced down a professional army led by generals and aided by Europe's fascist armies. 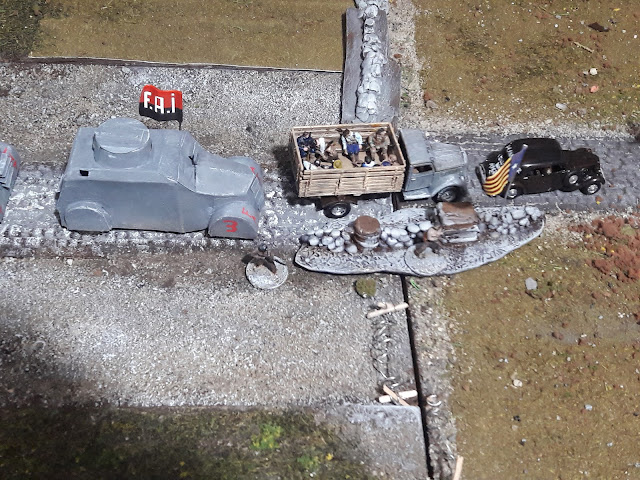 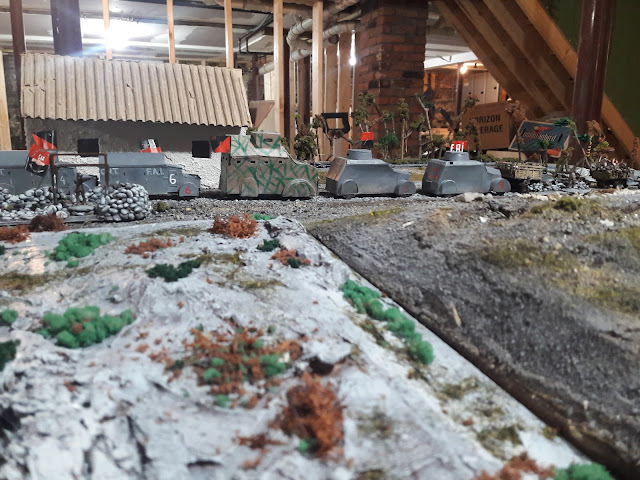 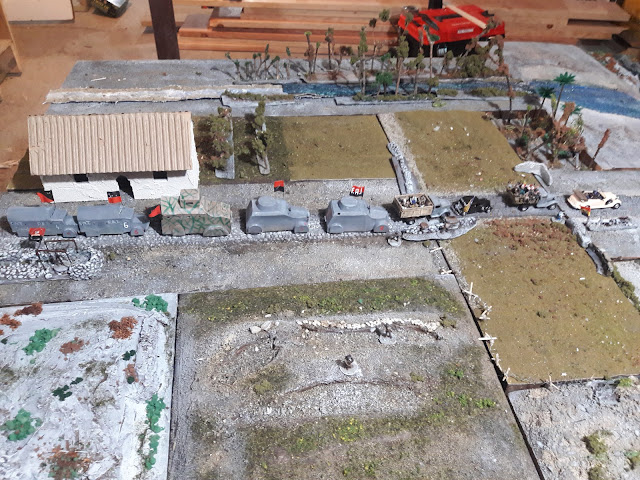 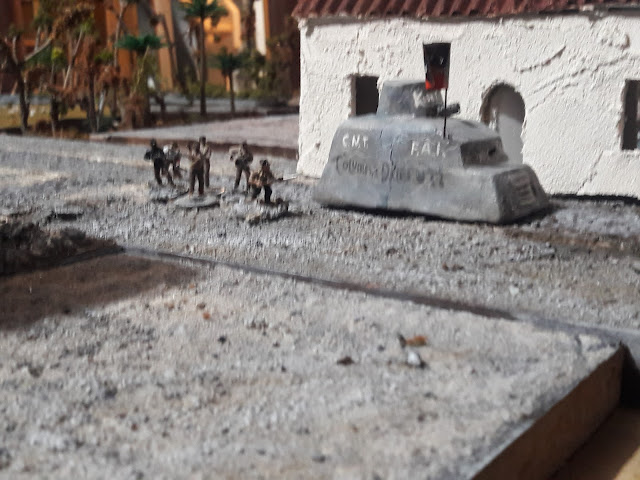 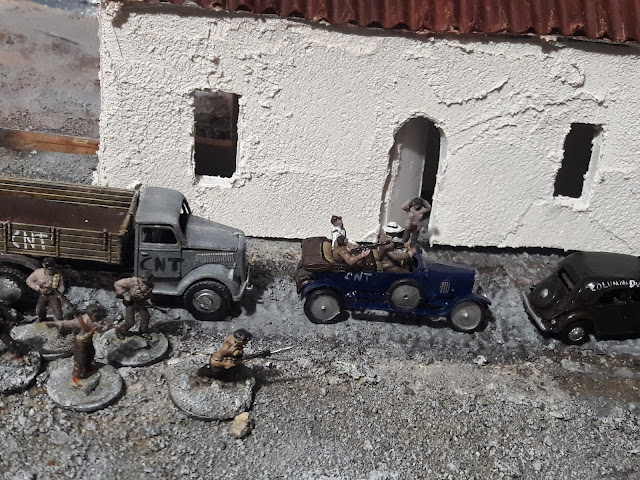 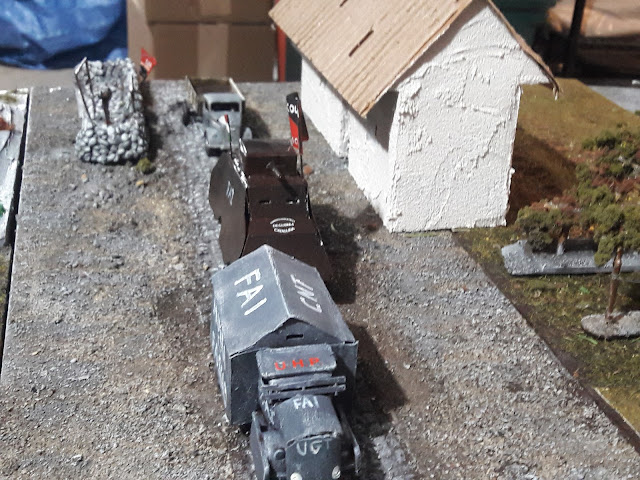 Thanks for reading my first post! More to come!
Posted by TrenchesFullofPoets at 7:40 AM No comments: