The monument sits in the middle of the rotary (or round-about for all of you outside New England), where a handful of military buildings served as the final holdouts of the military coup in the area on July 20, 1936.

The monument was fun to build. I used styrofoam, cardboard, random scraps of plastic and construction debris, clay, and a handful of plastic miniatures, which I converted heavily.

Here is a photo of the whole thing put together.

A close-up of Columbus himself, perched atop the column and pointing. He's standing on top of some sort of knob I had in my junk pile.

Th column itself is made out of cardboard, the corrugated part showing after I removed the flat paper part on one end and rolled it against a wooden dowel.
At the bottom of the column, I built some angels. These were converted from B.U.M. plastic Native Americans using hot water to reposition their arms and legs. I carved them up a bit and built wings out of miliput.

At the bottom of the monument, I tried to built eight statues present on the actual monument. These too were designed from a handful of disparate plastic mini figures. Most useful turned out to be the friars from Imex's set of California Mission Indians. These required lots of knife work, limb swaps and miliput sculpting.

The back drop behind these statues as well as the base they sit on were made from carved foam. Their pedestals are mostly clay.

I made the rotary and the raised base section out of cardboard, spray paint, and gray paint.

Here they are one on top of the other.

And finally, the whole thing together (again).

Its certainly not a perfect nor accurate model, but I think this approximation will add a lot to the look and the feel of the game.
I need to build a couple more buildings--has anyone noticed foam board has become hard to get a hold of?--and then I'll be ready to put the table together for the next game, which I hope we can begin early next year. Check back here to see how it all come together. As always, I'd love to hear your suggestions and comments.

Posted by TrenchesFullofPoets at 4:52 PM

Sueños de Libertad - The PLM in the Mexican Revolution  Coming January 29, 2022! The first edition in the Mini Makhno and Durruti series: ... 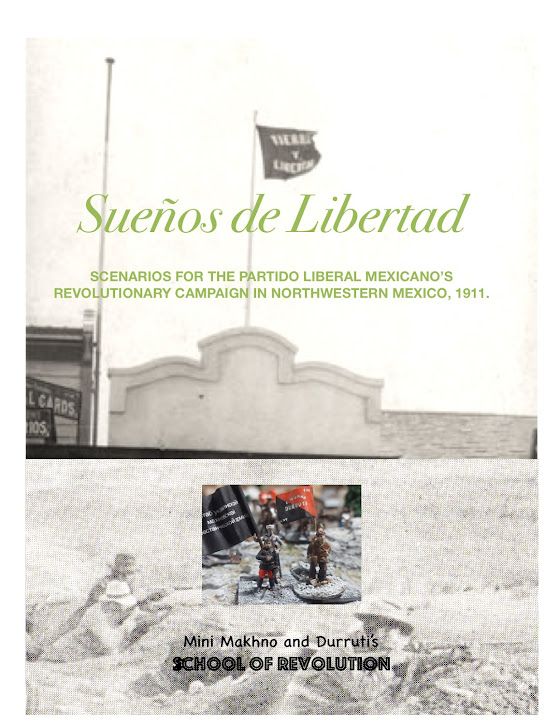